Turned my back for a second in the studio. I was wondering what the noise was. Hank discovered the Kleenex box on my nightstand. Worked hard to get them all out of the box… he was so proud of himself. 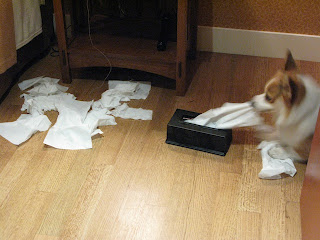 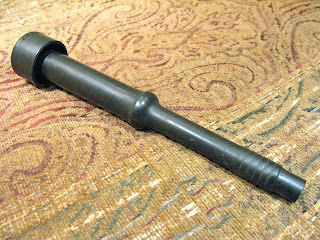 It's the ultimate Corgi chew toy (described as “indestructible” by some). This is a Conewango ID-01AC. It's a liner dairy farmers use for the cow end of automatic milking machines. They're made of soft, food-grade rubber and they're very strong. Hank hasn't made a dent in his yet, it's been a week. He loves playing with it… it's soft, flexible and it rolls on a curve. WE love him playing with it because it doesn't have a squeaker and it's quiet on our hard wood floors. You can have a tug-o-war with it too, it stretches a little.

More soon on how to get some.

From the Bad Pun Department:
1.  It's an udderly great Corgi toy.
2.  Hank is moooved to play with it.

Just uploaded videos from the Santa Barbara Kennel Club show, August 27-30, 2010. It was a great weekend for Bill Shelton and the Coventry Corgis… Best of Breed, Best in Group and Best in Show… more than once. Recommend the video of the Breeder's Showcase Herding Group.

Regular pictures are here. Go to “My Gallery” for pictures from earlier shows.

Bible Verse of the Day

Regional Corgi Clubs - In Order of Founding by PWCCA